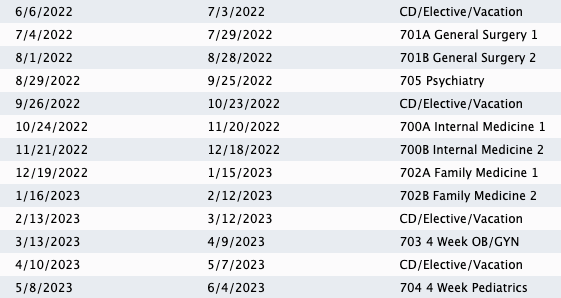 At first glance the third year schedule is so different than OMS I and II.

After the lottery when you pick your core site, you’ll get an excell document showing you your schedule for the year. You’ll see it’s divided into 13 four week blocks also called rotations (though not all blocks are rotations)

Of the 13 blocks, 9 are called core rotations. These are all clinical rotations.

In completing these nine core rotations you complete 6 core courses because three of the courses (IM, FM and surgery) are each 8 weeks or two blocks. This type of rotation is sometimes called a clerkship because you act as a “clerk” which is a term not used very often anymore in medicine.

You’ll hear the term green blocks a lot and when you get your Excel document with your schedule on it you’ll see why. There are four blocks on that schedule that have a green background color. Each of these is a different course, and to complicate matters, two of the four green blocks, elective and vacation, can be broken down into 2 two-week courses or blocks. Two of the green blocks can’t be broken up but are both Clinical Distinction opportunities – CD I and CD II. Your schedule won’t tell you which of the types of green blocks are in which month – this is up to you to decide within the following boundaries.

First you have to use one four week green block or rotation, for an elective ( also sometimes called a selective). The elective is usually a clinical rotation or clerkship but instead of being assigned to a particular site or specialty you get to pick what the rotation is and where you do it – within certain boundaries. With approval you can do a few alternate activities instead of clinical work for your elective, which include global health, military training and MPH project work. Your elective is also different than core rotations and Clinical Distinction, in that it can be divided into 2 two-week blocks.

Then there is vacation – you’ll use one of the 13 blocks of time in third year for vacation, with a caveat – you can opt out of Vacation and use all, or part of it, for an additional rotation elective. Like your elective, it can be divided into 2 two-week blocks so you can have 2 two-week vacations or one two week vacation and one bonus 2-week elective.

You decide what to do during your green blocks….